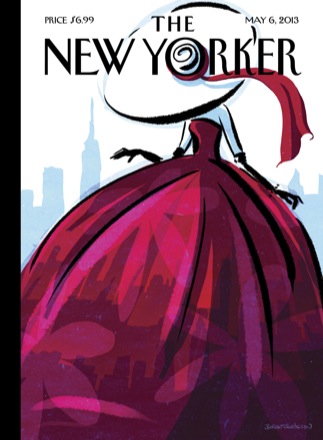 I started reading this days ago but it didn’t grab my attention at the time, possibly because the first half of the “story” is background—to hear the story of Miriam’s big night in 1958 we have to first hear about how her parents, Rose and Albert, met, conceived Miriam, and then split. It was this long flashback that suggested to me this might be a novel excerpt, which, it turns out, it is. (Lethem’s new novel is due out in September, we learn from the Q&A with Jonathan Lethem.) The backstory isn’t completely irrelevant—it’s helpful to know that Miriam’s parents were in a Communist Party cell and that a Burl Ives album was a prized early possession.

But the real story is when 17-year-old Miriam is out with a group of people (her “cell” she later thinks of them) at a folk club and hears that Burl Ives song performed. She remembers being taught the meaning of the song as a child and it gives her a feeling of confidence. Eventually she pairs off with Porter, a Columbia student, and over the course of several hours they find various places to make out, eventually winding up back in her bedroom (in her mother’s apartment).

The characters of Miriam and Rose are appealing. I’d be interested in reading more about them.