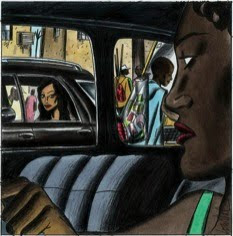 Set in Lagos, Nigeria, this is the story of an angry young woman having an affair with an older, married businessman. The affair proceeds somewhat predictably—it’s the sort of plot that is very difficult to do with rehashing some very tired situations—but the woman’s anger and her observations about her place in Lagos make this story work very well.
She’s stuck in traffic and she sees a woman in another car who makes her think of her lover’s wife, who lives in America. And as they sit in traffic, the narrator keeps remember aspects of the affair—that she felt hidden away (the dark restaurant they went to), invisible (the driver and the waiters don’t acknowledge her). And there are various other elements of the affair that also drive her into deeper anger. But it isn’t just the affair—it’s also her job, where she and another woman are treated poorly, and Lagos generally. “Rituals of distrust. . . That is how we relate to one another here, through rituals of distrust. . . . We know the rules and we follow them, and we never make room for things we might not have imagined. We close the door too soon.” As she’s delivering this speech, she begins to cry in front of her lover, something she doesn’t do. His wife cries, but she doesn’t cry, and so this is something of a shock—and it spells the end of the affair.
This is a very good story. And although the Q&A with Chimamanda Ngozi Adichie tells us that she’s working on a novel, there’s no hint that this part of it. Maybe it is, but it seems to work well as a story.
September 20, 2010: “Birdsong” by Chimamanda Ngozi Adichie