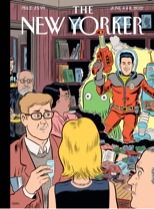 I found this unreadable on my first, lazy effort. I don’t like the form—fiction in tweets?—and so I was highly resistant. But then I listened to the podcast conversation between Deborah Treisman and Jennifer Egan (which includes shorter conversations with Jonathan Lethem, Sam Lipsyte, and Junot Díaz), and decided to give it another try. You can find the podcast here.

The first thing that’s interesting is that the main character is LuLu, drawn from Egan’s A Visit from the Goon Squad, and the story is set in the 2030s. And the “tweets” are really the character’s recorded thoughts as she carries out her spy mission. Egan says she isn’t a tweeter, and that’s evident from this piece. The story is tweetable—segmented into short bits, something that’s been done—but isn’t made up of credible tweets. The bits are, however, legitimate “lessons learned,” which, Egan tells us in the podcast, was the working title of the story.

The story, part of which is available for free, concerns a woman who has been implanted with chips and communication devices (Really? These aren’t detectable?). As an unpaid “citizen agent” she infiltrates a terror cell by being a “beauty” for one of the “violent, ruthless” men. Her instructions include how to dress: “Gold spike-heeled sandals may compromise your ability to run or jump, but they look good on tanned feet.” Still, the woman is part of something called “the new heroism” in which “the goal is to throw off generations of self-involvement . . . to dig beneath your shiny persona.” And that, it seems to me, is what the story is really about—discovering what lies below the surface.

But other than that, it’s mostly just a suspense story set in the future: what is LuLu going to discover? How will she escape?

So, in the end, the story that I at first found unreadable I now think of as a pleasant diversion. I still don’t like the form, though. (Note, however, that it’s largely in second person and, it seems to me, this is a case where second person makes sense as the thoughts really are separated from the physical person.)