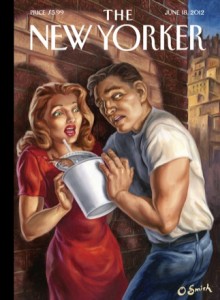 Although a reader can “get” this story (except that it’s behind the paywall), it is comforting to read the Q&A with Ben Lerner, which at least articulates some of what the author was trying to do. For example, I understood on first reading that there were levels of reality here, and that the narrator isn’t entirely reliable. In the Q&A, Lerner says: “The piece is concerned with raising questions about the relation between fact and fiction, activating those questions in peculiar ways—but the questions, not the answers, are what strike me as interesting.”

So. The main character of the piece, “the author,” has recently published a novel (which is also true of Lerner, the author). He has issues with meeting other people, including facing the question of how autobiographical his novel is—which of course is something most fiction writers face. This anxiety is compounded when he goes to the dentist to have wisdom teeth extracted, and he has to choose between I.V. anesthetic and a local shot. He chooses the I.V., but for him it raises the question of what happened and did not happen.

The x-ray for the dental work reveals a mass that a neurologist identifies as a tumor that is probably benign. The character is told to watch out for symptoms, one of which is temporal distortion, but of course the whole story is temporally distorted.

And there’s more, such as when he travels on a family vacation with his new girlfriend Hannah (or is she?) and is asked about Ari, someone we don’t know.

It’s all a bit disturbing and the reader isn’t sure whether any of the story is true. But then, none of it is strictly true. It’s fiction.

I liked this a lot.