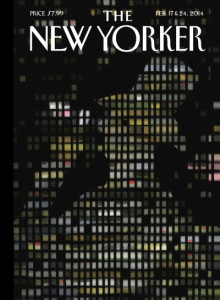 As we learn from the Q&A with Karl Ove Knausgaard, this “story” is an excerpt from Knausgaard’s novel, My Struggle: Boyhood. The interview’s not all that helpful, except maybe to understand how autobiographical the novel is (and that it, in turn, is part of a six volume series of novels).

The story begins with young Karl Ove thinking about the girls in his class you look down on boys their age, although he also looks down on his classmates for being conformists. He sees one girl he likes in particular, and eventually they meet and speak. They go out (which amounts to running around on bikes, apparently) and plan to meet again for pizza at her house when her parents are away. But first, he goes with her into the woods and they kiss for a long time. Then later when he calls to find out what time he should come to her house, she tells him it’s over. Karl Ove seeks solace in music.

Now, maybe the novel does something with this episode from the author’s childhood, and apparently the girl remains an important ideal for him, but this excerpt seems awfully shallow. Boy meets girl, boy gets girl, boy loses girl. And? Not much beyond that.