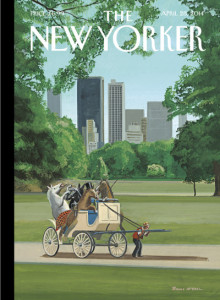 It’s a pleasure to read a previously unknown Shirley Jackson story. Here, a young man, Christopher, is leaving his previous life and takes the road through the forest, accompanied by a cat. But the road ends at a great stone house in the middle of the forest. The residents of the house welcome Christopher and the cat and he dines with Phyllis, Aunt Cissy (Circe), and Mr. Oakes. The house cat, Grimalkin, is defeated in a brief skirmish with Christopher’s unnamed cat, who then inherits both the name and place as house cat. The next day, Oakes shows Christopher the house’s vast records and the roses he has planted. Then, as the evening meal is prepared, Oakes sharpens his knife and goes outside. The women send Christopher after him with instructions.

The Q&A with Shirley Jackson’s son, Laurence Jackson Hyman is quite interesting because it talks more generally about Jackson’s work and also the cache of unpublished and uncollected stories Jackson’s family discovered after her death. As for this story, the interpretation is relatively straightforward when one realizes its mythic and fairy tale origins.