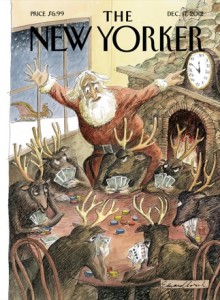 Because the author has a new novel coming out, I kind of hoped to learn that this story is an excerpt from it. It doesn’t really feel complete to me, and dwells too much in the past. But, apparently, based on the Q&A with Marisa Silver, it’s not an excerpt. So we have to live with what we’ve got.

Since the story is behind the paywall, let me spell it out for you. A husband and wife have a three-year-old son in pre-school. They’ve recently moved from the city where the wife had a hectic and intense medical practice and now they live in a small town—not far from where the husband grew up—and she’s taken over a small town, quiet medical practice. Which they can afford to do because the husband has made a bundle designing and making furniture for a fast-growing chain of coffee shops. But the kid is in trouble at school for pretending to shoot another kid with a stick (his AK47, he calls it) because he’s the police and the other kid is a wobber. (Ugh.) This is problematic for the family because there’s something in the husband’s past, which the wife knows about, that is going to be doled out to the reader in manipulative bit after manipulative bit. Of course we guess what it is, because of the mention of the husband’s childhood friend and guns and funerals. But we’re wrong.

The kid gets suspended for biting the other kid (Hey, they told him not to shoot the boy!) and husband and wife struggle with what it all means and what to do about it.

There is a meditation, of sorts, on violence and boys and guns and hunting, but if there’s a conclusion it’s lost on me. Something like: Boys are violent and they are doomed to brood over it their whole lives.

I did like in the Q&A the comments Silver makes about not starting a story with a theme in mind, only connected threads, and she is content to see what develops. That, I think, is usually the way to build imaginative stories. But this one, in my opinion, is spoiled by the manipulative, drawn out flashback to the husband’s childhood incident.