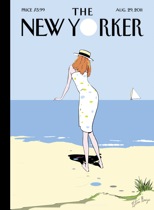 August 29, 2011: “El Morro” by David Means
I don’t think I’ve read David Means before, or if I have I don’t remember his name. After reading this story, though, I think I’ll remember. And when I checked him out online I discovered that he’s published four collections of stories and no novels. And then I found this terrific piece in The Paris Review: Why David Means is Not a Novelist.
In the meantime, there’s this story: “El Morro”. I had to look that up because I figured it was a real place, and it is. And that’s not irrelevant to this story: National Park Service: El Morro.
But what makes this piece is the voice of the male character, who is in the middle of a tall tale that he’s telling a girl he picked up, and he goes on and on expounding about various aspects of the Zuni, and then also about the girl, based solely on a few facts that she’s given him—she was tossed out of her father’s house near Springfield, Illinois. But because this is in the third person, we’re actually getting her thoughts, and so she is able to fill us in on her experience since her Springfield days.
The story turns when they meet a woman who is helping guide traffic in construction over the mountain pass, and they guy becomes infatuated with her, because he assumes she is Zuni.  The girl becomes less central to his thinking, until finally . . .
First, what’s memorable about the story is that it is mostly about leaving your mark on the world, which is what the El Morro monument is also—ancient graffiti, in which the girl also participates. But second, the ending is memorable because it includes something of a Chekovian “spin-out”—a shift in consciousness at the end that allows it to reflect on what has gone before in a way that the story’s central consciousness might not be able to.
Definitely worth the read if you have access to it.