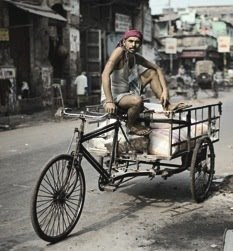 Chenayya is a cart driver who makes deliveries for Ganesh Pai’s furniture shop. The work is crushing, especially when he has to pedal the cart over Lighthouse Hill. He pays Pai for the privilege, but earns tips from the recipients. He also plays the local lottery. On one particular trip up the hill with a heavy burden, he sees an elephant coming down with a light load. He’s struck by the injustice. In the evenings, the other cart pullers drink cheap liquor, but Chenayya doesn’t join them, but instead thinks about injustice and plots to steal from the furniture seller. A journalist visits the cart pullers asking questions and inspires Chenayya to seek work in a factory instead, but that doesn’t work out. He as a moment of clarity (completely implausible, it seems to me) that he should work for a political candidate, and he is indeed able to help the candidate win votes in a Muslim neighborhood. But he receives no reward for his work. The next day, he receives an extraordinarily large tip from a European. With his good fortune, he buys lottery tickets and liquor (and again, this is implausible, since he hasn’t wasted his money on liquor in the past) until all the money is gone. He grows even more bitter. On the way back from a delivery he sees the elephant again, and the mahout is also complaining about life. Chenayya imagines that the poor have built their own jails.

And that’s it. We’re left with a very poor, angry man who at the end of the story is maybe a little less angry, for no reason that makes any sense. I hope for Adiga’s sake that this is an excerpt from a new novel, because it makes a lousy short story.