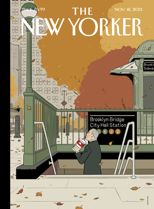 There’s not a lot to learn from the Q&A with Jeffrey Eugenides, but there it is anyway.

Charlie D. is a fake. He’s from Michigan, but he’s put on a Texas drawl to fit in, complete with down-home expressions. He’s married to a tall German woman, and they’re in counseling, after he confessed to sleeping with the babysitter. In terms of plot, that’s about it. Charlie’s voice is fun, and some of the details are great: he is interested in the smell of houses; he plays Words with Friends with his daughter; his marriage to his wife was, initially, a sham to get her a green card, but they fell in love; she’s very tall and successful at work (she works at Hyundai, although they drive a Nissan); and so on.

But the bulk of the story is the two of them playing “Find the Bad Guy” in counseling and Charlie moping outside the house.