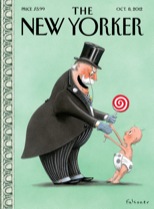 After reading this story, I figured it was a novel excerpt because it doesn’t really end. The contributor notes say that Vapnyar has a new novel coming out next year, so then I was certain. But the Q&A with Lara Vapnyar says nothing about this being an excerpt, so I just don’t know. If it’s a story, I don’t like it much. If it’s a novel excerpt, I see some potential for it. (The story is available to read for free, so you can judge for yourself.)

The story begins with Marina on her way to see a client. It turns out that she’s some kind of home health aide, visiting Elijah, who is watching the news accounts of the death of Bobby Fischer. Fischer’s death brings to Marina’s mind an episode from 1972, the year of the Fischer-Spassky chess championship in Moscow. She and her husband Sergey are thinking of emigrating. As Soviet Jews that would mean first going to Israel, but eventually to the United States, which they have imagined is some kind of heaven. But they’re both really into the chess match, at first rooting for Fischer because he’s some kind of symbol of the US to them. But then Sergey makes an odd wager, of sorts—if Fischer wins, they will emigrate. If Spassky wins, they’ll stay put. And Marina begins to think that she likes it where she is, so she gets angry at Sergey for rooting for Fischer.

Jumping back to the present, it turns out that they did emigrate, that Sergey died of a heart attack shortly after their arrival in the United States, and that she gave birth to a daughter after Sergey’s death. (The daughter seems irrelevant to this story, which is one reason I was sure it was an excerpt.) But there she is, helping old Elijah, while he talks about how Fischer had become this crazy old anti-Semite.

In the Q&A, Vapnyar tells us that the story is about the dual disappointments in life in the US and Bobby Fischer. That doesn’t seem to be enough to make this story work, though. Does it?