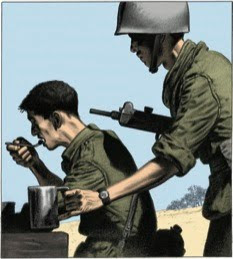 Although there’s more to Englander’s story than there was to Gilb’s story last week, I’m not sure, ultimately, that it’s more satisfying. I’d welcome other views.
Essentially, the story is about a young Israeli boy, Etgar, who is trying to understand his father’s treatment of Professor Tendler. The father, Shimmy, runs a fruit and vegetable stand and always gives free vegetables to Tendler, just as he gives free produce to young war widows. At first, when Etgar is very young, he gets one version of the story. As he ages, he is allowed to know more. Eventually, when he turns thirteen—the age of bar mitzvah—Shimmy tells Etgar the whole story. At this point, the reader thinks he knows what Etgar is about to hear, because Englander begins the telling of his story with a horrific incident in which Tendler kills a group of Egyptian commandos and then beats Shimmy senseless. But the incident that Etgar needs to understand took place much earlier than that, in World War II.
The way Englander has Shimmy tell this story is worth noting. He tells of Tendler’s improbable survival in the war. And then there is more to tell, and more. (I won’t reveal what happened—read Englander’s story!) Finally, Etgar hears the truth and he learns his lesson, which is that life is complicated, filled with excruciating choices.
Which is a good way for a story to end.
May 17, 2010: “Free Fruit for Young Widows” by Nathan Englander