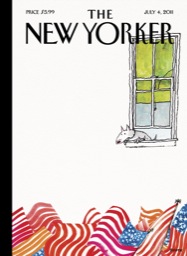 July 4, 2011: “Homage to Hemingway” by Julian Barnes
This story needs more attention than I’m going to be able to give it here, but on my cursory look it’s a very good story—especially if the reader also happens to be a writer.
The story is divided into three parts, in each of which a novelist is teaching a writing course. First he’s in the countryside in England with adult students. Next he’s in the Alps in mid-Summer. And last he’s in the US, in the Midwest, teaching undergraduates. Over the time covered by the story and the three parts, he separates and then is divorced from his wife; a book has come out and not done well; and his most recent manuscript has yet to find a publisher.
Things don’t go so well in his writing classes, either, but he begins to refine his schtick. He likes to talk about Hemingway, although in this case he actually likes to talk about a Hemingway lookalike, but that invariably leads to talking about the writer himself. And the story he chooses to talk about is an unusual one for Hemingway: “Homage to Switzerland.”  Here is Barnes reading that story: Homage to Switzerland. (It’s no coincidence that this Barnes story has a three-part structure.) The narrator finds that men and women in his classes react rather differently to Hemingway, and he explains to his students that his own assessment has evolved into admiration, making the point that so many readers have missed what Hemingway was doing, that it’s really all about vulnerability and failure and not just about machismo.
In the end, with plans to write an “American novel” that he assumes he won’t be able to publish because it isn’t what readers want anymore, he takes notes on the class he’s teaching, including the different reactions of the genders to Hemingway.
It’s interesting that the class would fall apart over the issue of names. The female students don’t like the fact that the females in the Hemingway story are unnamed. The narrator asks if they’d be happier if the male narrator were unnamed and the females all given names. They say yes, and so he’s done that. In each part of the story, his name is left out. The students call him Chief, or Professor, or in the final section, Maestro. But the students are named. Although I like this bit of self-referential structure, I think I would have liked it better if the narrator had helped the students discover a rationale for why the names had been left out. (I usually assume that the author is aiming for universality.)
It’s a good story, worthy of rereading, and perhaps one of the best of the year.