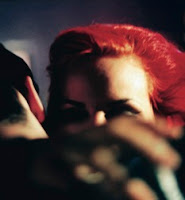 Sam Shepard has a story collection coming out in January, called Day Out of Days, and I get the impression that it’s full of road trips. In September, The New Yorker published a story from the collection, “Land of the Living”, which I discussed here, and another story, “Thor’s Day (Highway 81 North, Staunton, Virginia),” appeared in Zoetrope: All Story this Fall, and I discussed it here. I didn’t love either one.

The current story takes place on the bypass around Indianapolis where the narrator, Stuart, has stopped on his drive south from Minnesota. But winter weather and a hot rod convention have conspired to leave him without a hotel room, so he’s sitting in the lobby of a Holiday Inn, trying to ignore the unignorable true crime reality show blaring from the big screen TV(s). We know that he’s “crisscrossing the country again, without much reason,” but there seems to be more reason than we’re allowed to know. In walks a tall skinny woman wearing a bandanna, and they exchange glances but he doesn’t recognize her. But she recognizes him, as it is revealed when she returns a few moments later. Although they had once lived together, Becky doesn’t seem too upset that he doesn’t remember her. They swap quick histories—he has 5 children by a couple of women, she has two daughters, but that’s why she’s in the hotel: they’ve been kidnapped by her husband, she thinks they’re on the run to Florida, and she can’t stay in her house because the police are investigating. Whoa!

Okay, goodnight then, nice to see you. Huh? After this monstrous news, that’s it?

So Stuart goes out to his car to drive on to somewhere in search of a motel, which is when he remembers that not only did he leave his car running (it’s still there?), but his dog is inside. They head down the highway into deteriorating weather and the past comes flooding back to Stuart, unleashed, apparently, by his chance (way too much chance, if you ask me) meeting with Becky. He seems to be falling apart while driving, and it isn’t all because of the snow. In any case, he turns around and comes back to the Holiday Inn, calls Becky on the house phone, and starts crying. Not just crying, but weeping.

Sorry, Sam Shepard fans, I don’t buy it. I believe that he’s got something going on in his life that has made him this vulnerable, but Shepard doesn’t get to just make us assume it’s there. So he had 5 children with two women. So he doesn’t remember Becky. So there’s a murder loop on reality TV. We need to know more about this Stuart guy. Moreover, the kidnapping of Becky’s daughters? Is that a crazy plot device? Wouldn’t it be better if her house had burned down?

Should I put some of this crazy stuff in my next story? Is that how you get a piece into The New Yorker?