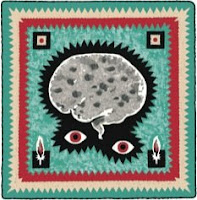 Fragmentation suits this story, and is the perfect vehicle for Alexie’s use of humor to explore serious topics. Here we have a narrator—like many of Alexie’s narrators, this one may or may not bear an uncanny resemblance to Alexie—who goes through a medical scare. He’s suffering from hearing loss, which he initially attributes to allergies, and discovers that he actually may have a small tumor. His foray into the medical facility raises a certain amount of anxiety, and also recollections about his father.

On a previous visit to the hospital with his father, the narrator had an encounter with another Native American in which the two eventually touch on one of Alexie’s favorite topics—stereotypes. In this case, the stereotype involved Indian blankets, which the narrator needed for his father, and it turned out that the other Native American did, in fact, have a supply of Pendleton blankets. (I liked that especially because very nearly got one of these great blankets at an outlet store during a recent stay in Nebraska, but they weigh a ton and getting it home would have been problematic.)

Each of the fragments here is its own story as the narrator builds up to the punch line of his medical condition: “There was a rumor that I’d grown a tumor, but I killed it with humor.” And in fact he’s fine. But the real point here is the narrator’s relationship with his father: “I wanted to call my father and tell him that a white man thought my brain was beautiful. But I couldn’t tell him anything. He was dead.”

Nice story. It’s a little too odd to be in contention for story of the year, probably, but it’s a good one anyway.