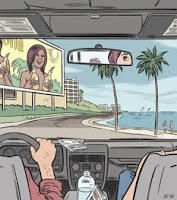 I didn’t hate this story, and it isn’t a novel excerpt, so that makes it one of the best stories of the year so far. A couple from Minnesota is vacationing in Cancun with their kids. There are other snowbirds on the same flight and at the same hotel. There’s a delay at customs, the only point of which that I can determine is to allow husband and wife to discuss his personality change now that he’s on Xanax. And to make them late getting into the hotel, the point of which isn’t clear. The wife, on the drive from the airport to the hotel accuses the husband of having a girlfriend, which he denies. The reason the wife suspects him is that she answered his cell phone and it was a woman on the line. Still, he denies it. On the flight home, an older man, whom the husband has seen several times on the trip, dies. When they get back to the house, the cell phone is ringing.

Huh? The important elements seem to be the husband’s personality change (attributed to Xanax, but possibly owing to the girlfriend, if she exists), the death of the old man, and the ringing cell phone. I’m going to go out on a limb here and say that this marriage is over, and the death of the old man—who had been in a wheelchair—is a sign to the husband. I bet he’s going to answer the phone and go to the girlfriend, even though it appears that he had been prepared to leave her behind.

Or not. I don’t think the story’s really good enough to worry about what it really means.