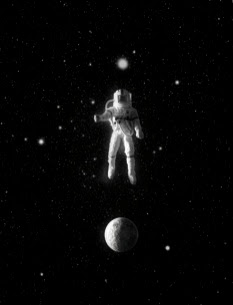 The contributor notes this week tell us that Jonathan Lethem has a new novel coming out in 2009, news that raises some question in my mind about the present story. Was it meant to stand alone? Or is it an excerpt? I have my doubts because this story, as wonderful as the prose is, does not end. It merely stops, as if the editor had filled the available space and had no need to go on.

The situation reminds me of an episode of Twilight Zone or some other early TV show: the astronauts are trapped in space and they spend their time writing to their loved ones as the situation becomes increasingly dire. And here, in fact, the story (such as it is) is told through letters from Janice to her boyfriend, Chase, back on earth. The space station where she and the others are trapped (due to a “great wall” of Chinese space mines) is failing, function by function, and so, it seems, is Janice. We don’t know the outcome of the story, but for me it doesn’t matter much. I was delighted by Lethem’s language.

“I’ve got some good news and some bad news. Ha ha ha ha ha—imagine, please, my convulsive laughter. (I read this opening line aloud to Zamyatin, who happens to be running on a treadmill in the room as I type this letter to you, and he hound it has hilarious as I did. Moments like these are all we have to savor these days; please don’t begrudge them.)”

The good news is that they had a successful space walk to repair hull damage; the bad news is she has a cancerous tumor.

Which is another reason why I’m suspicious of this piece as a story. But, never mind. The language is too much fun to worry about what’s going to happen to Janice the Lostronaut.