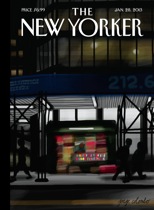 The Q&A with Kevin Canty won’t be terribly helpful to access this story, but there it is. I hate to say it, but this doesn’t seem like a terribly inspired story, to me. It begins well. James and his girlfriend Molly are driving toward the home of some friends and run into a cloud of migrating butterflies. Molly is upset by this and doesn’t want James to go on. (Molly is an interesting but unsympathetic character—she’s a vegan who has given up drinking, but she smokes and doesn’t have much empathy for James’s teaching load, plus she’s just lost her job and is unemployable.) They arrive at the home of Sam and Jenny—a day before they’re expected, because Sam seems to have gotten this wrong. Sam and Molly drive off to Denver, leaving James alone with Jenny, giving her a chance to reveal that the marriage is in trouble and Sam can’t be trusted. With James already having doubts about marrying Molly, this bad news about a marriage he thought was solid is unsettling. With everything falling apart anyway, he and Jenny have sex.

Huh? And what’s that got to do with the butterflies? I suppose we can concoct some kind of connection—the fragility of life, of marriage, is like a butterfly crushed on the windshield? But it seems pretty forced, to me.

The best part of the story is when James goes fly fishing. We should have had more of that.