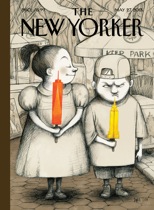 I’m not sure I get this story, which you can read in its entirety for free. Go do that now: “Thirteen Wives.”

Here’s the gist of it. The speaker says he lives in a sprawling house and each of his thirteen wives has her own room. He then proceeds to describe each of the wives—listed by number, not name—and his relationship with her. All the wives are quite different; in fact, they seem to cover the universe of possible personality types, as if his wives represent all women. In contrast, we know very little about the personality of the man, except as he compares himself to each of the wives. But he is not every man—he is one man. Who, then, are the women?

As I read through all the different wives, I wondered if the narrator weren’t speaking really of just one woman, with moods or a split personality. (It’s not clear how they could play cards in small groups, as the narrator says they do, if that were the case.) It might be that the wives represent the same wife at different ages. In fact, wife number 10 is sick, and wife number 12 is a “negative woman,” as if she were really an absence, rather than a presence. And number 13 is his memory of women. He says, “ The incessant changefulness of my thirteenth wife may, of course, arise from something deceptive in her nature, as if she’s continually casting up new images in an effort to evade responsibility for any one of them,” which suggests that she is all the previous wives put together.

Millhauser is known for such slightly off-kilter, perplexing stories. As of this writing, there’s no Q&A with the author to help us with this one. So, what’s your take? Do you find this a sexist story?