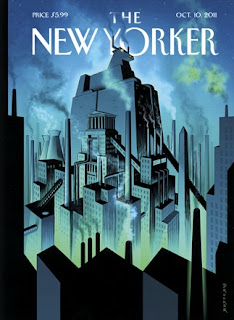 October 10, 2011: “Oubliette” by David Long
Supposedly, this story is part of a series of “flash fictions” about characters drawn from a novel by Long, which, I would imagine, is why this feels less like a stand-alone story and more like a novel excerpt. Except that it’s pretty short, it doesn’t feel like flash and it also doesn’t feel much like a short story.
Nathalie is the daughter of Peter Chilcott, a documentary filmmaker, and a woman who dies of Huntington’s disease when Nathalie is a teenager. But before she’s diagnosed, and simply behaving oddly, she locks Nathalie in the attic (hence the title). This freaks everyone out, of course, leading to divorce, then diagnosis, then treatment and regular visits. Frankly, I didn’t find it very interesting.
What I found more interesting was the Q&A with DavidLong, in which he says, among other things,

After publishing three short-story collections, I was persuaded to write my first novel, “The Falling Boy,” and then it was as if the short-story switch had been toggled off. “Novels are hard,” I told people, “but they’re less trouble than a book of stories. Novels are mostly middle; stories are all beginnings and endings.”

He goes on to say that after writing several long projects, he was excited to work with a much shorter form. I can relate.
The story is behind the pay wall, but I really don’t think you’re missing much.