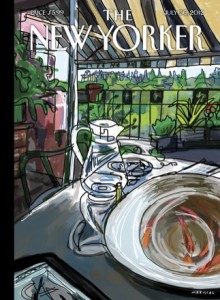 I wasn’t happy with this story at first, mostly because it seemed like a typical teenage angst piece, just set in a minority community in London. But it gradually became more than that, and in the end I think I like the story a good deal. Except maybe not the ending. Still thinking about that.

However, I was disappointed to learn from the Q&A with Zadie Smith that the “story” is an extract from a novel, which explains disappointing ending, the long time period covered, and odd structure (which I definitely do like). So, the publication is nothing more than advertising for a book, and maybe not worth discussing on its own.

Still . . . it deals with two girls from a housing estate in North West London. Their paths diverge and cross again while in college. Keisha Blake, who midway through the story becomes Natalie when she goes away to college, is experimenting, as is her friend Leah Hanwell. But Natalie seems to be seeking “permission to enter”—permission to leave her life behind and enter a different world, one that is more diverse and definitely more privileged. And it’s also one that isn’t constrained so much by family and church.

All of which is reasonably interesting, and so I think the book sounds promising.