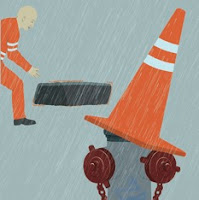 Jonathan Lethem’s Chronic City, from which a story was excerpted in The New Yorker earlier this year, was recently released, so presumably the current story is not part of that book. It could be though, from what I know about it. Here we also have a portrait of New York City that is slightly off its axis—a little bit weird, but not alarmingly so. The protagonist, Stevick, is unemployed and hangs out near his favorite coffee shop, but not inside because he might run into his ex. While sitting on a bench outside, he witness an “installation”—two men in orange jumpsuits install a third, who is bound and gagged, in a hole in the pavement that they have dug. They cover it with boards and leave, assigning Stevick the task of standing over the hole with an umbrella to keep the fellow in the hole from getting wet. Eventually, another guy comes buy to feed the guy in the hole and he also gives Stevick a sandwich, along with a duffel bag. It is only when Stevick’s ex comes by, and seems to find nothing terribly odd about the situation, that Stevick learns that he’s been issued his own orange jumpsuit, and has a few extras to boot.

What’s it all mean? Possibly nothing. We live in a world where anything can happen and often does. So, maybe it’s just a story about a guy who stumbles across a job of taking care of a guy in a hole. But I don’t think so. For one thing, the title of the story is odd. In English, at least in my English, we don’t use the expression “in plain air.” We do, in speaking of art, however, use the French expression, “en plein air,” meaning “in the open air,” which refers to painting out of doors. The language of art is used in the story, also, when the activity of sticking the guy in the ground is referred to as an “installation.” It’s as if whatever is going on here is an art piece, a combination performance and sculpture that New Yorkers, for the most part, are too oblivious to notice.

Still, what’s it mean? Again, maybe nothing, but what I see here is mistreatment of a human being by other human beings, in which the prisoner himself remains silent, and against which those who witness the treatment also remain silent. Not only are the witnesses silent, they are enlisted to help, not only with the current prisoner, but potentially with other prisoners, although it is acknowledged that they themselves may be the next prisoner. Stevick is issued extra jumpsuits because through his behavior he is going to recruit more people to the cause.

Or maybe not. Thoughts?