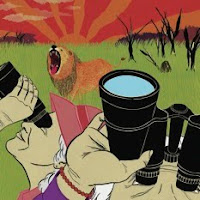 This “story” is actually an excerpt from Egan’s forthcoming novel, A Visit from the Goon Squad, which, according to Random House, is about a fellow named Bennie Salazaar. In this excerpt we don’t even meet Bennie, but we do meet Lou, his mentor, various associates of Lou’s, Lou’s two children from his first marriage, and Mindy, who is destined to be his third wife. So it isn’t clear what this excerpt has to do with the novel, but as excerpts go it stands alone pretty well.

The piece is unusual, though, in its omniscient point of view and the way, especially toward the end, that it offers flash-forwards revealing the futures of many of the characters, including the children, Charlene and Rolph, and also Mindy, the girlfriend. But the main action of this excerpt is this: Lou, a record producer, is on safari in Africa with his much younger girlfriend, two of his children, his travel agent, and two members of a band he produces, and their girlfriends. (It has too many characters.) Among other things that happen, the group encounters a pride of lions and one of the musicians wanders too close, prompting a lioness to attack him. The incident provides fodder for discussion, and also solidifies the attraction the girlfriend feels for one of the guides, an Englishman who saves the day with his rifle.