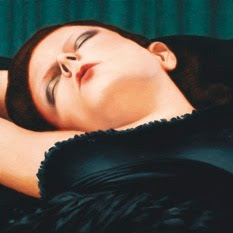 What’s odd about this story is the sense of being lost in time. When the story begins, the reader doesn’t know quite from what point in time the narrator is looking back, but it turns out to be from a great distance. And yet as he watches the woman sleeping—we don’t yet know they’re married—the early days of their relationship are replayed in his head. In fact, though, we learn halfway through the story that he’s an older man now—not old, but it’s 25 years after the couple first got together—and they have grandchildren. He’s frightened because he’s been diagnosed with colon cancer, one more reason why he can’t sleep, although she goes on sleeping. He believes he isn’t going to die, or says he believes, because the specialist has said there’s a good chance he wouldn’t. And then we are thrust back in time to the most dramatic incident in the story, the time when their son Aaron had a serious asthma attack and almost did die. And that brings us back to sleep.

The point, I think, is that sleep is death. In life, the narrator doesn’t sleep much. He watches his wife sleep. But now, contemplating his own death, sleep is on his mind. Which is a marvelous glimpse into this man’s mind. Ultimately, for me, that connection makes this a satisfying story that would have been nearly perfect if the opening paragraph had made the narrator’s perspective in time clearer. Still, though, it’s a good one.