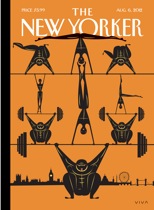 Since F. Scott Fitzgerald isn’t around to defend himself or answer questions, this week’s fiction, a “rediscovered” Fitzgerald story, is discussed in a podcast by fiction editor Deborah Treisman. The introduction to the podcast includes the rejection letter The New Yorker sent Fitzgerald’s agent when the story was submitted in 1936. They didn’t like it much then, and they probably should have stuck to their guns. (I suppose they get kudos for publishing a “new” Fitzgerald story, even a bad one.)

But anyway, here it is. Interestingly, the story features a woman, a widow who travels a sales territory peddling women’s undergarments. She works hard and doesn’t read and can’t watch movies to relax, so she’s quite hooked on smoking. In her new territory, it’s more difficult than it had been, which causes her more stress, which makes her want to smoke more. She slips inside a Catholic church where she figures she might light her cigarette on a votive candle. But then . . .

I won’t even attempt to say what the story is supposed to mean. That even the smallest prayers will be answered if asked in the right way? That the Virgin Mary loves hard working women?

What did you think?