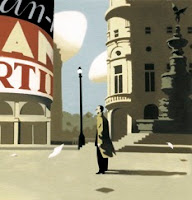 More allegory? I have not read much J.G. Ballard, who died last month, so I don’t know how typical this is for him. Perhaps someone more familiar with his work can enlighten us?

In this story, J.G.B. wakes up one morning finds that the mail and newspapers have not been delivered, the power is off. He is annoyed by this and goes to see his neighbor, but the neighbor’s house is empty. Eventually it appears that the world is empty—no people, no dogs, no traffic, no airplanes. Nothing. His transistor radio works, but he only picks up static, including from European stations. He drives into London—nothing. He finds a motorboat, zooms over to France and finds Calais equally empty. In the meantime, though, he has been to the London zoo and found that the birds are still in their cages, and he frees them. In the end, surviving on canned food, he manages to forget all the people and lives alone, visited by the birds. The key is in the last line: “Thus the year ended peacefully, and B was ready to begin his true work.”

Two possibilities occur to me, both sparked by the title of the story. One is that this is the autobiography of a writer, any writer, or indeed of any artist. That before one’s true work can emerge, one must eliminate the distractions of the world—save, perhaps, for the birds, which are traditional symbols of freedom, doubly so here because B has released them from their cages.

Given Ballard’s recent death, though, and remembering the poems of Updike that The New Yorker published after his death, I wonder if this little story isn’t [also] about death. Perhaps the author is speculating that this is what death is like—the absence of everyone you know. In death, one begins one’s true work: to decompose, visited only by the birds.