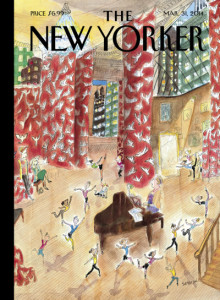 I admire Louise Erdrich’s work, and I liked this story in which a man marries into a family of women who snore. (Read the Q&A with Louise Erdrich to get a notion of where the idea for the story might have come from.)

Although the man isn’t particularly bothered by the snoring, he does eventually leave his wife and daughter for another woman, a woman who doesn’t snore. But he meets regularly with his ex-wife to discuss their daughter, and eventually they begin an affair. They decide to remarry, and with his settlement from his wealthy second wife, they enlarge their condo and get a big screen TV on which he watches a birthday video his wife (first and current) made. But it’s a disturbing video, made up of clips from his career as a minor television actor. Disturbing because it ends with a series of clips in which he dies or plays a dead man. And now he finds the snoring harder to take, reminding him of the sound of a big cat.

Erdrich says there is no “moral” to the story, which I’m glad to know. I agree with the interviewer that the story has a bit of a fairy tale feel to it, though. It does not have a happy ending, however, and I like the darkness to it.