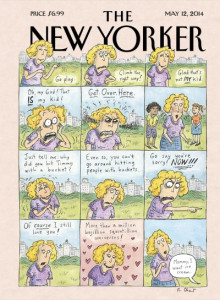 It’s unfair, I suppose, to apply American standards of story-telling to a piece of Russian fiction, but I didn’t care for this at all. The story being told is fine; it’s the method, which is mostly telling and very little showing, that bothers me.

Boris is a dissident artist and his anti-government cartoons have become well known. As a result, the KGB comes to arrest him, but he is able to slip away and escape to the countryside, where he takes refuge in a friend’s dacha. He’s bored and begins to draw pictures, including those of the local women who help him. He continues to avoid arrest for several years, but he becomes reckless and is eventually caught. Instead of being charged with sedition, though, he is jailed for pornography. He’s out in two years, emigrates, and remarries.

I suppose the story is a commentary on Soviet absurdities and the deprivations of the Russian people during the Soviet era. Unfortunately, the way it’s written makes it difficult to enjoy whatever the message might be.