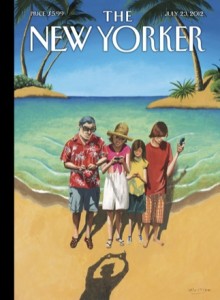 There certainly are things I like about this story. Díaz’s character Yunior is with us again—always—but he’s older now, and in pain. Granted, the pain is of his own making, but what’s good about that is that by the end of the story he comes to understand this. As Díaz himself says in the Q&A with Junot Díaz, Yunior finally seems to be seeing women as fully human beings, which hasn’t been the case before.

Here’s the story: Yunior, who teaches in Boston, is in a relationship with a woman in New York. She’s great and demands fidelity. He blows it—in a big way—and she dumps him. He’s broken up by this and his friends, including Elvis, try to help him. He rebounds into a relationship with a beautiful law student, but she cons him and he deserves it. He starts running to get back into shape, but injures his foot. He does yoga, but injures his back. He has mysterious tingling numbness in his arms—all representative of his inability to feel.

But he does make a connection—with Elvis’s bastard son in the D.R. It’s definitely a sign of maturity for Yunior, but he recognizes that Elvis has been had by the mother of the child. Yunior is growing up, although it’s not clear that he’s going to find the happiness he longs for.

I saved my complaint for last. The story is in second person, as Yunior is detached from himself, looking at how he came to be in the sorry position he finds himself in. So, okay, that makes second person almost work here—Yunior the narrator isn’t really the same as Yunior the character. And I gather that the new story collection of which this is part will be much the same—the title is This is How You Lose Her, so the point of view is going to work in the context of the book. (Díaz channels Lorrie Moore?)