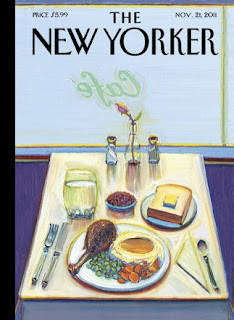 November 21, 2011: “The Climber Room” by Sam Lipsyte
This is the third Lipsyte story in The New Yorker in the last 13 months. The first of the three I didn’t like much. The second one, “Deniers,” I thought was much better. And I liked this one a lot, at least until the ending, and that I’m not so sure about.
The story is about Tovah Gold, who, interestingly, is a minor character in “Deniers.” (Check out the Q&A with Sam Lipsyte in which he’s asked if that suggests he’s working on a bigger project, to which he replies that he’s working on a collection of stories linked by the fact that he wrote them. Heh.) In “Deniers” I liked Tovah because she was a send-up of the pretentious poet. In this story, she’s grown up a little, and is less pretentious, but is attempting recover her fondness for poetry. She is employed in a private pre-Kindergarten, which exhausts her (although it’s a part-time job), and in that capacity comes to know little Dezzy (short for Desdemona), the daughter of Randall Gautier. (When he introduces himself, she thinks he has said “Randy Goat,” which turns out to be close enough.)
Because life isn’t going anywhere for Tovah—not that she’s unhappy, but she’s sort of treading water—she fantasizes about becoming Mrs. Randy Goat. And, more to the point, about having Randy Goat’s baby. She is suddenly, at age 36, anxious to have a baby: “It didn’t matter if the baby was hers except it absolutely did. She wanted to carry it and give birth to it and breast-feed it and live in a natural cocoon with it for as long as possible, with somebody on the outside slipping everything she needed through a slim vent.” (Which makes it seem a bit like prison, doesn’t it?)
And then the story, or its climax, is what actually happens between Tovah and Randy. It allows Lipsyte to give Tovah a nice monologue, which begins, “You know, it’s very hard. Here. In America. In the world. For women.” Which, if this story has a point, is pretty much it. And then . . .
I’m sorry the story is behind the paywall, but I don’t want to give away the ending.