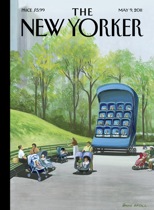 Whatta ya know? A story about New York in The New Yorker!
This one involves a washed up comedic actor and his second, younger, wife. He’s, apparently, bi-polar, and she’s, apparently, neurotic. He’s taking anti-depressants, among other things, and she’s taking valium. Lots of valium. On the day in question—which happens to be Halloween—Alice and Stephen (for some reason we don’t get their names for the first couple of pages) are feeling good and they’re out walking and shopping. It’s what they like to go when Stephen is feeling up to leaving the house (or getting dressed, for that matter). He likes to buy things for her, but he also likes to buy things for her. (What they buy are unnecessary clothes, so they can dress their parts, not unlike the Halloween costumes they encounter on the street.)
As the day goes on, Stephen’s mind washes over his ex-wife, a prostitute, a woman he had an affair with, a woman he didn’t have an affair with, and his declining resources, as well as generally contemplating his problems: “The problem—the problem—was that he was no longer getting cast in the comic roles that had become, over years of acting in plays and, for a brief spell, on television, his strong suit.” But then he realizes that isn’t the root problem, or yes, in a way it was.
He and Alice have an argument over nothing. They both have something of a meltdown and drop into a coffee shop for a bite to eat and their meds, although while Stephen is in the restroom Alice takes a few more for good measure, which makes her a little wobbly when they head out to the street for more shopping. Then, in the middle of the story, came a nice surprise for me. Stephen is reflecting on the fact that they’re both from North Carolina, although they met in New York, and they had considered a return visit:

“For the first year or two of their relationship, they’d discussed plans to rent a convertible and drive south together through New Jeresey and Delaware and Maryland, continuing around Washington and on through the Shenandoah Valley, in Virginia—there was a nineteenth-century inn near Staunton that he’d read about in a food magazine and wanted to spend a night or two at—and then from there into the southerly regions of the Blue Ridge . . .”

Staunton! (There are some cool old inns around here, and practically everything is nineteenth century.)

But the meltdown continues—it slows briefly while Stephen interacts with a young couple and their costumed child, and the wife recognizes Stephen from television—until Alice finally renews her accusation that Stephen had an affair while Alice was in the hospital (after her suicide attempt) and then runs off. Now HE takes a couple of valium and then finds their favorite bar, where everyone else is in costume. But she joins him, they go home and he puts her to bed, where he fantasizes that he’ll get his career back on track, they’ll have a child together.

So what’s it all about? Clearly, Stephen and Alice are costuming themselves, or at least Stephen is doing it for the both of them. He reflects on his costume experiences as a young actor, and he comments to the child he encounters that her lion costume makes her surprisingly—because she’s a girl—ferocious. The costumes aren’t just what they wear, I suppose—the meds are part of it, as are the lies they tell themselves. This is not a couple with a happy future.

By the time I got to the end of the story, I wasn’t sure what the title referred to. But one nice thing about the Kindle is that you can run a search, and I found just one use of “he knew” in the story. It’s near the end, when Alice has again accused Stephen of having an affair: “Now he could hear and feel her terror, and he, too, began to feel frightened, because he knew here this fight could take them.” And I think that’s the point. He knows perfectly well where they’re headed, and since there’s nothing he can do about it, they might as well dress up and take their meds.