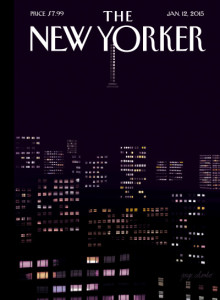 Coover’s story from last January, “The Frog Prince,” is what ended my New Yorker commentaries, temporarily, as it turns out. I saw no point to the story and was subjected to a rude comment by a visitor, which is still there if you’d care to see it. So I’m no fan of Coover, but at least I liked this new story more than the one about the frog.

“The Crabapple Tree” is narrated by a woman whose husband has left her. She’s somewhat unreliable, I suppose, so that contributes to the fantastic nature of the story she’s telling, which is about a guy who had been a popular boy in school. The guy got married and his wife died in childbirth. Later, he married a woman, the “Vamp,” who, the narrator says, slept/sleeps with most men in the town, including the narrator’s ex, and probably also the sheriff, whom the narrator is now dating, and the fire marshal, whom the narrator marries in the course of the story. The Vamp’s daughter from her previous relationship is weird. Under mysterious circumstances, the guy’s son, Dickie-boy, dies and is buried under the crabapple tree on their farm, next to his mother. Then the guy dies and is also buried there. (Meanwhile, there’s a suggestion that the Vamp made a stew of Dickie-boy and fed it to her husband, and that she probably killed them both.) The Vamp runs off, leaving her daughter, Marleen, behind. And, according to the narrator, things just remain weird at the crabapple tree.

The surface of the story is amusing, kind of a harmless horror story told by an unreliable narrator. Is the narrator telling the “truth?” Maybe. But maybe not. She hates the Vamp. The narrator herself isn’t an ideal woman, it seems, or maybe is no worse than the Vamp. And maybe that’s the point of the story, if there is one.