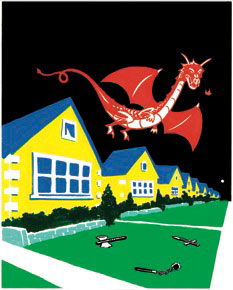 A bunch of kids are play Dungeons & Dragons after school (at least I guess that’s what this is—having never played the game, I don’t know if the description of the game is right or if the author has come up with something new) at the home of the “Dungeon Master,” a boy who seems a bit disturbed, although it could be nothing more than having grown up without a mother. The narrator is a shy boy on the periphery who eventually gets fed up with the Dungeon Master (the broken wrist the DM causes could have something to do with it) and moves on.
But the DM doesn’t move on, lives in his fantasy world, and hints at a future suicide. Other kids in the group are also pretty marginal—one kid who is a thief in the game turns out to be a thief in real life.
Is there a point here? Is it that we—meaning the parents of impressionable kids—need to keep closer watch? Because it does seem to me that the Dungeon Master’s father could have been doing a better job with him, and the narrator’s parents aren’t so hot either. But, really, is that the point?
On the one hand, this story seemed far more readable than anything else I’ve read in The New Yorker lately. But I think it only appeals in a relative sense. My standards for this magazine have fallen.
October 4, 2010: “The Dungeon Master” by Sam Lipsyte

4 thoughts on “>The New Yorker: "The Dungeon Master" by Sam Lipsyte”