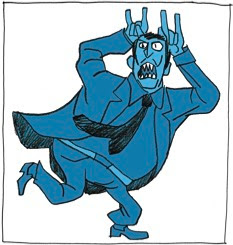 I assume that this story is included in honor of Halloween, since it does feature the Devil as one of its characters. Sort of. The narrative structure of the story is quite interesting. It seems to be a monologue by Grandma Ignatia, perhaps being told to one of her grandchildren. In the opening paragraph Ignatia begins to speak (“Grandma Ignatia said”) and then in the last paragraph she is wrapping the story up (again: “Grandma Ignatia said”). In between we hear from Ignatia about her love for a man Cuthbert, a big, rich man whose sisters did not approve of their relationship because, they said, she was having sex with the Devil. Which she was, in her dreams. But then . . . You can read the rest of the story, which is quite short.

As I say, I like the structure. I like Grandma Ignatia’s voice and the tale she tells is engaging. Beyond that . . . the story does nothing for me. It’s a pleasant little ghost story that a Grandmother might tell her (mature—she does talk about having sex with the Devil) grandchildren. But I’m not sure there’s more to it than that.

2 thoughts on “>The New Yorker: "The Fat Man’s Race" by Louise Erdrich”