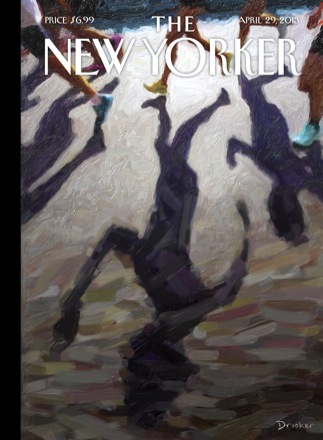 Maybe it’s only because I re-read it this week for a class I’m teaching, but this story strongly reminds me of “The Enormous Radio” by John Cheever. Which is a compliment.

Here, the main character overhears a conversation in a bar. Then his cellphone rings—his wife is calling—and he hears snippets of her conversation that reveal she’s having an affair. (Worryingly, the reader wonders if the protagonist has misunderstood. Is there some misunderstanding? Will it all be revealed, romantic comedy style, to have been a mixup about which they’ll all laugh later? In the Q&A, Ferris notes that his wife when she read the story wasn’t sure that Katy, the wife, was guilty.)

He’s devastated. He goes on long walks and hears snatches of conversations that aren’t at all comforting. Same on the subway, in shops,  etc. These fragments of conversations are what remind me of the Cheever story, in which the husband and wife hear through their new radio various revelations about the goings on in their neighbors’ apartments. Interestingly, in the Q&A with Joshua Ferris, the author mentions other Cheever stories because of their subject matter, but not this one.

If there’s a complaint I have about this very enjoyable story it might be that the title is too obvious. The snippets of conversations are fragments, the guy’s life is blown to fragments, and he begins giving away his wife’s possessions, fragments of their marriage. A little unsubtle, I thought. Also, the subject of adultery is a little tired, and while the take on it is relatively fresh, the story doesn’t go far enough to add depth to that subject.