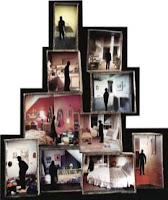 Chris, Amanda, and Susan, three adults who had been the godchildren of childless Vivien, visit her house for the first time since her death a year before. Chris, an academic, claims not to remember the house or even Vivien herself. Amanda, who has organized this visit so the three can claim items in the house for themselves before a planned estate sale, has the most vivid, although selective, memory, because she kept a journal back in those days. And Susan, a lawyer, remembers, but is disdainful. They wander around the house, bringing up old memories, in particular one memory of spying on Vivien. Eventually, Susan leaves and Mandy reveals to Chris that Susan had had a crush on him when they were kids, which Chris didn’t realize. He understands that it’s too late to do anything about it, but he and Mandy now feel some “vibration of passion” between them—and a sudden memory returns to Chris of a makeout session he’d had with Mandy back then. The ending of the story spins out to Susan’s consciousness, in her taxi on the way to the station, fingering a small item she’s taken from the house: a pair of carved ivory masks.