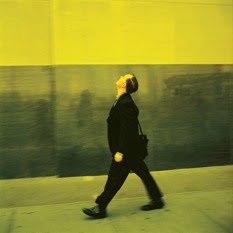 Is this a parable? Or what, exactly? Is the “invasion” of yellow “animate dust” a symbol for something else? Almost certainly, I think, but what? It seems to me it could represent anything new in a culture: the return of democracy; a Starbucks on every corner; the arrival of HDTV. “It is really quite peaceful, in its way.” Said in a way that suggests the contrary.

So there’s this arrival from out of space. It turns out to be a dusting of single-celled organisms that reproduce in sunlight at an amazing rate. (What was the name of that wacky sci-fi movie with the cute little fuzzy things?) The people are curious, of course, but are warned to stay away from them. But they keep growing and the mounds rise “like bread”. The people are being lulled to sleep, but there’s danger in the bread. What is it? It could be anything, I think. And that’s this story’s problem.