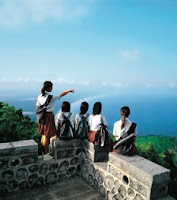 I’m not sure what to make of this story. It’s skillfully written, but it seems to lack emotion. Or perhaps that’s the point? (But then, of course, we’d have an imitative fallacy problem!) Suchen is a U.S. resident, originally from China, but she has put China in her past because of an incident that occurred when she was a girl. She and five other girls had entered into a suicide pact—the reasons aren’t clear to Suchen and if she doesn’t know, the readers certainly don’t know—and carried their plan out. Except that Suchen survived. Since then, an outcast, she’s been haunted by what happened, but not, it seems, with sadness. She doesn’t understand, but neither does she really seem to grieve.

At the time of the story, though, she is on her way to join her classmates. She has abandoned her possessions, granted her husband a divorce, and intends to sink beneath the surface of the ocean, never to be seen again.

Except . . . she meets Walt, an older gentleman who latches onto her. He is still hurting from the death of his wife from leukemia, and his wife had asked for a divorce when her prognosis became clear. The end of their marriage parallels the end of Suchen’s, and Walt understands no more than Suchen’s ex-husband why such a split was desired. Suchen claims not to understand, too, but surely she does. In the end, it isn’t clear that Suchen will carry out her plan, although the last line, I think, suggests that she will—despite a series of delays.

And what do we make of the beginning. There is a fire in the hills, the smoke from which threatens the visitors to the ski resort where Suchen meets Walt. Suchen, however, can’t smell it or see it. Is the smoke meant to represent something? A “smoke screen” perhaps? One that Suchen can’t herself recognize? She seems to feel at the end that she has let her husband go for his own good. But is that true? Or is she kidding herself?

This isn’t, in my opinion one of the year’s best New Yorker stories, but it’s far from the worst.