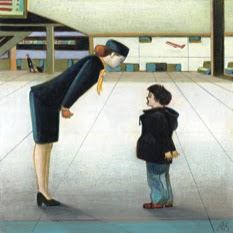 There’s a kid wandering around the Hamburg airport and various airline personnel are trying to figure out what his story is. They aren’t able to communicate with him and he won’t tell them his name, or doesn’t seem to understand that they want to know his name. (He understands; he just knows he’s not supposed to give out too much information!)
Then the story backs up and we find out that Elroy Heflin was in the army and was posted to the US Embassy in Riga, where he hooked up with Evija, whom he gets pregnant. She doesn’t want to get married (she doesn’t?–that’s a twist that might be worth exploring), so when he is sent to Afghanistan she’s still in Riga with the kid. Then he’s back in the US visiting his father (his stepfather, actually, although that also isn’t explored) and he gets an email that he can have the kid, she’s moving to Spain. He’s happy about this, he thinks (he’s crying, apparently), so he heads off to Riga to get the kid, Janis. A third party hands Janis over and off they go. He boards a plane with the boy, they have a layover in Hamburg, but then Elroy panics—he has no idea what to do next. (Um, passport? That might have been a good place to start. Why is this guy so clueless?) He leaves Janis in the bathroom while he goes off to think. One thing leads to another and he winds up on the flight to London, and then he just goes on to the US, and arrives at his stepfather’s place in Las Vegas. Oops.
He’s deployed two years later to Afghanistan again when he hears from Evija, saying that she’s back in Riga and wants him and Janis back. Uh-oh.
I have no idea if this is a story or an excerpt. It feels like an excerpt. Much of what we know we get in exposition, and the ending feels more like a beginning to me. What’s Elroy going to do now? How is he going to find Janis now? What are the consequences of what he’s done? What’s the deal with the stepfather?
Actually, that all sounds pretty interesting—but the story we’ve got here, not so much.
See the Q&A with Salvatore Scibona
June 14 & 21, 2010: “The Kid” by Salvatore Scibona