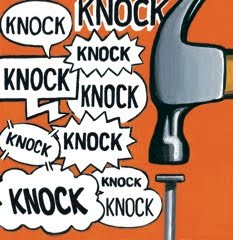 On the plus side, this doesn’t seem to be an excerpt from a novel. On the other hand, it’s not much of a story. Flash fiction that needs considerable editing, maybe.
The narrator has moved into an apartment building in New York and almost immediately discovers that his upstairs neighbor is fond of knocking—in many different ways. The story explores many of these different types of knocking, although some of the knocking doesn’t sound like knocking (incessant moaning, grief-filled swooning) and may, in fact, originate elsewhere. The narrator has met the neighbor in the hall, but assumes that the neighbor knows that late in the day the narrator is in his “deepest state of reverie” pondering the nature of his sadness. Which, apparently, is related to the end of his marriage to Mary. At one point, while he’s remembering Mary, the knocking becomes sweeping and remains just above his head. Then the sound switches back to a knock. The narrator admires the knocker’s dedication, but projects his own pain (“the pain of a lost marriage”) onto the neighbor.
I don’t think there’s more here than that. Views?