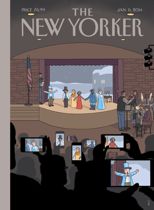 This is a terrific story with a lot going on. It’s a little hard to keep track of the people and their relationships, but it comes together. (The story is free to read, so you should!)

The first husband of the title is the protagonist’s first husband, her ex. Although Lovey is now married to William, her first husband’s youngest daughter, Benadette, comes to Lovey when there is a problem. Which there is on the night of this story. Lovey is having a dream in which the first husband features. Uh-oh, the reader correctly worries. (I hate dreams in short stories. To me the make the fiction more unbelievable, so if you’re going for realism, I recommend cutting dreams. But what do I know? Antonya Nelson doesn’t seem to be worried about it.) Bernadette’s husband, Aaron, who is a hell-raiser, is apparently on a binge and would Lovey watch the three kids while Bernadette finds him. So Lovey does that—feeds the infant from Bernadette’s breast milk, plays Monopoly with Caleb, the sensitive oldest child, and tries to pacify the toddler, still in diapers. But Bernadette may not have been completely honest about what was going on . . .

The main story here is Lovey’s apparently lingering feelings for her passionate first husband (who is now on his fourth wife) despite her love—but maybe not passion—for safe William. William, too, has an ex for whom he is the first husband, so Lovey is surrounded by them.

But there is also Bernadette’s story. Lovey is Bernadette’s enabler—a weak child who got into trouble a lot, and there’s a suggestion that Lovey might have been partly to blame for that. The older girls, not raised by Lovey, are more stable.

And, finally, there’s Lovey’s relationship with Bernadette’s children, especially Caleb, the boy. Caleb is perfectly competent—he knows how to heat the milk for the baby—and yet Lovey feels the need to let him win at Monopoly. Is she repeating mistakes she made with Caleb’s mother?

So we don’t need much help from the Q&A with Antonya Nelson, but it’s interesting to read anyway.