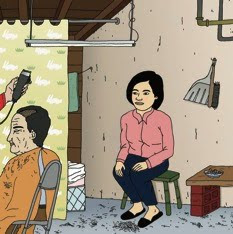 In the Q&A with Yiyun Li she mentions she’s working on a novel about leave-taking. While she doesn’t say that this story is an excerpt from that novel, it certainly feels like an excerpt to me. As much as I find the character of Zichen interesting and sympathetic, not much happens here. One could argue that there is conflict, as Zichen struggles to withhold the truth from her colleagues and maintain the fictions that she’s created for herself, and it even provides some decent tension—will the truth come out?—but it doesn’t get resolved and it doesn’t lead anywhere.

The story is that Zichen was born out of wedlock in China and was raised by her grandmother. At the first opportunity she fled—by marrying a man who was bound for the U.S. She miscarries, her husband divorces her, and she carries on a fantasy life that involves lying to her colleagues about her parents and her annual visits to them in China. Meanwhile, her one and only friend was Margaret, a senile older woman, who gives her a copy of Winnie the Pooh in Latin. Which she uses to learn Latin. And now she’s bound for England—her grandmother has died so the annual visit to China is more pointless than usual—to connect with Margaret’s past.
Li says that the story is about fleeing, but it seems to me that Zichen in planning her trip to Margaret’s village is really going home. Only Margaret has been her friend and it makes sense that she feels a connection there. She has no real home, so the village she has chosen to be Margaret’s (she doesn’t know the actual village) is where she’s going. At the end of the story Li says “the life she had made for herself was a life of flight, of discarding the inessential and the essential alike, making use of the stolen pieces and memories, retreating to the lost moments of other people’s lives.” And that’s what she’s doing with her trip to England.
As I say, Zichen is an intriguing character, but the story doesn’t do much for me.
August 30, 2010: “The Science of Flight” by Yiyun Li