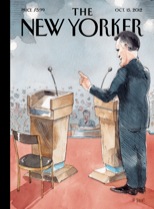 It’s Saunders, so you know there’s going to be something strange about this story. And there is. (The story is available to read for free online, so hurry on over to the magazine and come back.)

A father of 3 young children is having money problems, despite the fact that his wife’s father is a wealthy farmer (“Farmer Rich,” he calls himself), and yet he longs to satisfy the consumerist impulses of his daughter who is in competition with a wealthy schoolmate. When he wins $10,000 in the lottery, instead of paying off his maxed-out credit cards, he buys a lawn make-over, including the installation of several “semplica-girls,” basically imported young woman strung up on wires. But one of his daughters is appalled by these human lawn-ornaments and sets them free—which costs the guy a lot of money he hadn’t counted on.

That’s basically the story. Saunders says the idea came to him in a dream, including the word “semplica.” And it’s clear that part of the point is that these girls represent an immigrant underclass. I would go so far as to say that they represent human trafficking, although Saunders doesn’t say that in the Q&A with George Saunders. The tension here is the question we have no answer for—life is better in this world than it was for them at home, and they can send money back to help their families at home. So does that justify what we do? The same is true for the millions of people, men and women, who leave their poor countries in search of work as domestic servants and laborers in wealthier countries. The people are often quite happy because they’re working and making money. But does that make it right? The story doesn’t answer that question because it’s basically unanswerable.

But I like the fact that Saunders has a go at it. The story is worth a read.