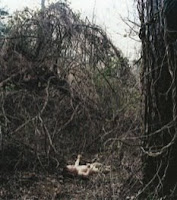 It takes a little while to figure out what’s going on here because the narrative voice sounds normal and the references are unknown by familiar—The Preserves could be a forest preserve, for example, and so as a place name it doesn’t raise much of a question. In the second paragraph the narrator reveals he studies “the Slows” and it isn’t clear yet what this is. But soon we come to know that it is a group of savage humans, and for a time the reader might suspect that the narrator is not human.

But we learn that the Slows are confined to reservations, isolated from the rest of the population, and that this narrator is an anthropologist who studies them. He has learned that the government has decided to close the Preserves, and so his work will end, but there is also the question of what will happen to the Slows. The woman has brought her child—the larva, he calls it—and the situation becomes clearer. Society has developed Accelerated Offspring Growth, a treatment for infants that brings them rapidly to maturity. Its purpose was to help populate colonies on other planets, but was also implemented on earth. The Slows, however, insisted on keeping the old ways, and are afraid that the Accelerateds will take the larva and give them the treatment. The narrator has some sympathy for the woman’s plight, but he is disgusted by her (the breast feeding!) and in the end easily turns her in.

A bit of allegory is it? The problem with allegory often is that you can make it mean whatever you want it to. So, I pick a political interpretation. Obviously, the Slows are the Conservatives/Republicans. They think they are preserving the old ways, but they are really just standing in the way of progress. And the Accelerateds are Progressives/Democrats, who are on the verge of eliminating the last of the Slows. Total domination. (There is that nagging bit bout an outbreak of Slow behavior in the colonies, but maybe that’s just the suggestion that backwardness, like polio, cannot truly be eradicated.) Or something. (Of course the author isn’t American, she’s Israeli, and so I’m almost certainly wrong. So then, what’s it about?)