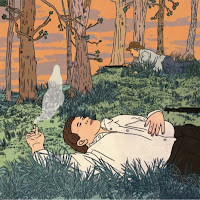 There’s a lot about this story that I like. There’s very little action here until the end—mostly we get interior monologue from one of the characters. I like the repetition of “Five days . . .” I like the thoughtfulness of the character Lee, the older of two FBI agents on a stakeout in search of Carson, a notorious robber. During the stakeout, the younger agent, Barnes, displays his youthful inexperience: he thinks they’re wasting their time. But his logic becomes more and more convoluted: “This guy knows we’re looking for patterns, and he’s even considered, I’d venture to say, the idea that we’d expect him not to come back here, and in expecting him to expect us to expect him not to come back, he’d expect that we’d take that expectation into consideration . . .” He ties himself up in knots.
There’s more repetition, too (giving additional weight to Barnes’s talk about patterns): the two men take turns crawling off into the woods to smoke; Lee presents analytical lists, befitting his character; Lee’s narrative alternates between the present action of the stakeout story and sections that begin with “Years later . . .”, the author’s signal that Lee has shifted into retrospection.
It is also the signal for what’s coming in the story, and that is the story’s biggest failing for me. It’s predictable. Please, I said to the pages as I kept reading, don’t let that be what happens. Much too easy. Please let the author work harder to surprise us! But, no. No surprises. It’s a shame.
October 25, 2010: “The Tree Line, Kansas, 1934” by David Means