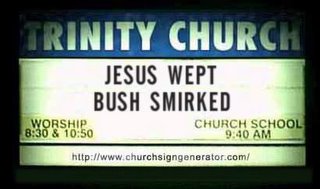 It stinks. It makes me cry. It’s got so many layers, it’s hard to know what the hell is going on.

I can’t watch Bush’s speech tonight. (I’m going to tape it so I can watch it later and fast forward through the stuff that makes me cringe, like a bad movie; at that rate, it might be the shortest speech on record.) Seriously, I can never listen to the man for more than a few seconds before turning him off. First there’s what he says, or what he tries to say. That’s bad enough because it usually has nothing to do with reality and is all about pulling the wool over our eyes. Second, there’s the way he says it, like he’s still a spoiled little boy talking to his servants, who in reality know a hell of a lot more than he does but because he’s the boss, he thinks he’s superior. He’s an arrogant twit, and I wish someone would wipe that silly smirk off his face. Hard.

And if Bush or any other leader in this country wanted to make some promises that would take us in the right direction, he or she should find away to bridge the gap between us that the Republicans have deepened over the past 6 years; he or she should work to improve our relations with the rest of the world, to find a genuine consensus in the struggle against terrorism; instead of trying to kill all our enemies, which only succeds in making new enemies, our leaders ought to be trying to understand why we have enemies in the first place–that isn’t appeasement, or negotiation, it is education. Instead of mortgaging our future, and the future of the next generation by running the massive deficits that Bush has used to finance his outrageous fascist folly, our leaders need to return to Clinton’s methods of fiscal responsibility. And our leaders need to move our people out of poverty, not through cutting the taxes of the wealthy, but by creating jobs, and opportunities, by ensuring that all people are treated fairly and without discrimination.

The response to Bush will be delivered tonight by Tim Kaine, governor of my state of Virginia. Now he might be worth listening to.