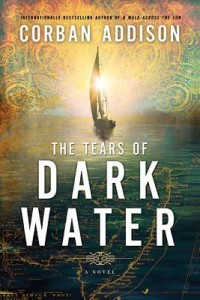 The Tears of Dark Water

Having read Addison’s first novel, A Walk Across the Sun, I had an idea of what to expect from this new book. I knew it would be international in scope, a fast-paced thriller, and multi-dimensional. I wasn’t disappointed. (I was also forewarned because the book is one of three I’m reading for a panel I will be moderating in March at the Virginia Festival of the Book called Pirates, Drones and Other Catastrophes: Thrilling Fiction.)

The book is told from several points of view, but it really seems to be the story of Paul Derrick, a top hostage negotiator with the FBI. It is his South African vacation that gets interrupted when Somali pirates seize a sailboat in the Indian Ocean with two Americans aboard–Daniel Parker and his son Quentin–and Paul is summoned to handle the talks with the captors. Other aspects of the story we get through the eyes of Daniel, his wife Vanessa, and one of the pirates, Ismail. Later, we learn more of the story from the perspective of two other characters, Paul’s sister and Ismail’s sister.

There isn’t much more I can offer about the plot that wouldn’t be a spoiler, so all I will say is that I was blown away by the scope and credibility of detail–the landscape of Somalia and Kenya, the voyage Daniel and Quentin have undertaken, the behavior of the pirates, the Navy’s rescue efforts. It felt credible and real in every way, but didn’t overwhelm the story, which has its own strengths. In addition, the characters felt genuine to me, for the most part, especially for the genre. These aren’t the cardboard cutouts that populate many modern thrillers. And the dialogue felt spot-on.

Furthermore, I admire what’s done here with the pirates, their motivations and their behavior. No excuses are made for the actions they take, but the enormous pressures on the Somali people are painfully clear. I confess I know very little about Somalia, but I learned a great deal from this novel.

I can highly recommend this fast-paced book especially for fans of international thrillers.