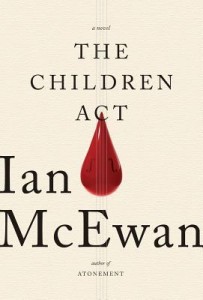 The Children Act by Ian McEwan.

It’s been awhile since I read a McEwan novel (and I confess that I listened to the audio version of this one).

The main character here is Fiona, a family court judge in England who has to deal with some very difficult and heart-breaking cases. She’s 60, and she and her husband Jack are childless. Also, the passion has gone out of their marriage, but Jack doesn’t understand why because Fiona doesn’t, apparently talk about her work. So he doesn’t understand the impact these tough cases have on her because she holds everything in.

As a lawyer, I found the discussion of some of Fiona’s cases interesting, but too much for the story. The details of the law threaten to overwhelm the plot, and perhaps that is part of the point. Eventually we move into the case that is at the heart of the novel: a 17-year-old boy with leukemia won’t accept a life-saving transfusion because he and his family are Jehovah’s Witnesses. Can the court compel the hospital to give the boy the transfusion against his wishes? Fiona’s decision in the case has serious consequences for the boy’s family and, as it turns out, for her own marriage.

Well done and serious, as we expect from McEwan, with a resolution I didn’t expect.