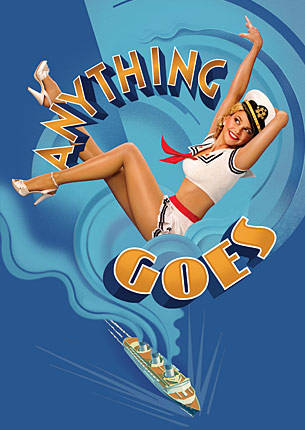 Now, that’s entertainment. I suppose that was the point back in 1934 when this Cole Porter musical first appeared, and that’s the point now. I saw the show at the Kennedy Center in DC and I was part of a very appreciative audience. (The show runs through July 7 in DC and then moves on to other East Coast cities and back to the West Coast.)

But I suspect I approached the show quite differently from the rest of the people in the audience–one of the stars is a good friend of mine. In fact, I had lunch today with Fred Applegate and his wife and spent most of the afternoon with them. Fred, besides being my roommate in college, plays Moonface Martin in the show, part of a really excellent cast. It was fun to wait for him after the show at the stage door and bask in a little reflected glory.

I’d never seen the show before, but I suspect everyone else knows the story, which is more or less a Shakespearean comedy set to music–thwarted romance, mistaken identity, disguises, schemes, and multiple weddings to wrap up the confusion in the end. Along the way, there are wonderful Cole Porter songs and some very impressive dance numbers.

Definitely an entertaining couple of hours, even if you don’t know someone in the cast.