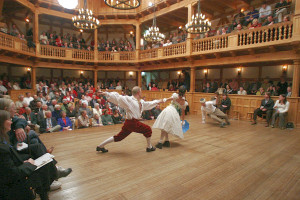 Staunton, VA is a pretty nice place to live. It’s in the heart of the Shenandoah Valley, between two mountain ranges. It’s been dry lately, but the hills and fields are lush. Because of our elevation, summer temperatures are not as oppressive as they can be on the other side of the Blue Ridge. And a lot of interesting people have found their way to the area—to retire, to start businesses, to explore creativity.

One of the reasons I moved here in 2001 was that the Blackfriars Playhouse, home of the American Shakespeare Center, was then under construction. It’s the world’s only recreation of Shakespeare’s indoor performance space, and it struck me when I was looking for a place to live that this audacious project was a sign of a special community. I was right. The ASC has thrived and has done wonderful things for the city of Staunton. Downtown is bustling with a wide variety of shops and restaurants, and there are other vibrant endeavors in the surrounding county.

But the Blackfriars is still my favorite thing. Sixteen shows a year (seventeen this year, as the team tries something new) in five seasons: Renaissance, Spring, Summer, Fall, and Holiday. We’re currently in the Summer season, with three blockbuster shows: Macbeth, Cyrano de Bergerac, and the Comedy of Errors. They’re all so good that it’s truly hard to believe we’re in a small town in Virginia.

Last night I saw Comedy of Errors. I’ve seen it a bunch of times before, including a few times at the Blackfriars, but this production takes it up a notch. The Antipholuses seem to have more energy than ever; the clownishness of the Dromios is delightfully exaggerated; the direction heightens the laugh-quotient and includes fun sound-effects; and the theater has placed the gallant stools in the middle of the stage instead of along the sides, making the audience even more a part of the show than usual. The result is a fast-paced, hilarious evening of entertainment.

Also this season, the company is doing Macbeth, with the great James Keegan as the bloody Scot and the intense Sarah Fallon as Lady Macbeth. Again, I’ve seen this play often, but never a better production than this one. It’s riveting and shocking and horrifying, even though you know what’s coming. Plus, the “Weird Sisters” are played by three men—Patrick Midgley, Greg Phelps, and Jonathan Holtzman—which is a curious and effective innovation. Truly a standout.

The other play this season is Cyrano de Bergerac. When ASC’s touring company did this show a few years ago, I fell in love with it. Anthony Burgess’s translation is miraculous. The language is simply stunning, and the performances (back then and now) do it justice. John Harrell, who is the mainstay of the ASC, is brilliant as Cyrano; Patrick Midgley is perfect as Christian; and newcomer Sara Hymes is outstanding as Roxanne. I can’t say enough great things about the show.

I’ve been a regular since the Blackfriars opened, and I’ve seen the audiences steadily grow. It has been especially exciting to be witness to a couple of SRO performances this summer. It must be terribly exciting for the actors to perform in that environment, and their excitement then is felt by the audience, which gives it back in appreciation. Last night—not just a standing ovation, but cheers and shouted approval.

I’ll see each of these shows a few more times. Come to Staunton to check them out. You won’t regret it.